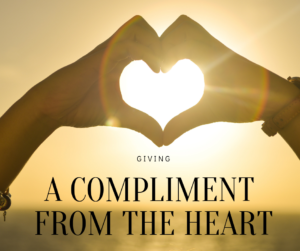 A Compliment From The Heart.

In 8th grade I gave a compliment to a popular classmate – from my heart. Unfortunately, they thought I was making fun of them as we liked the same boy. That is not how I operate and never have. Stupid kid stuff. They, and other classmates, chose to believe that the compliment was insincere, and a put down, instead of genuine. I was completely ostracized by the class of girls – for giving an honest compliment of admiration. Unfortunately, I was not strong enough to brush it off and ignore the BS from these silly girls and into a deep depression I went. You see, I was not one of the popular kids – a class of 11 girls and 11 boys. However, I would stand up for myself and it just added more fuel to the fire. Eventually, the popular girls came up with the idea of a “Peace Club” since we were to graduate soon and they wanted all to be good. Yeah… all was good… however… I was still not believed, I was still “wrong” and yes, we graduated in “peace.”

Along came EFT and Emotion Code and those trapped emotions were healed. It spurred me to study these amazing modalities and today they are at the core of my coaching work to help others.

Fast forward to today. Did that incident influence how I take a compliment? Indeed. I learned that it’s important to just say “thank you.” Listen, tune in and honor your intuition when someone gives you a compliment. You KNOW when it’s sincere. If you wonder if it is, ask yourself what is at the core of the discomfort. Is it about you or them? What does not feel right about it? Tune into your body and allow the answers to surface. Ask the giver questions to clarify if need be and tune in to the response. Perhaps the delivery was off but the intent real. Listen to the feelings.

Did that incident influence how I give a compliment? YES!
I say what I mean and mean what I say. It’s always from the heart and genuine because to me, the energy of being acknowledged by another, is sacred territory. And, I don’t play games. It serves no one.

When you get a compliment from me – it’s real.